Alzheimer's is a cognitive disease that affects memory in millions of individuals, especially those over the age of 65. When early signs of Alzheimer’s become apparent, it can be a daunting task for the caretaker of an elderly individual to determine the exact cause of a change in their loved one’s behavior. Often, Alzheimer’s physical symptoms may become apparent before a true diagnosis takes place. If you are worried that your loved one may be developing Alzheimer’s or another memory loss condition, there are signs and symptoms that you should be on the lookout for.

1. Forgetting Recently Learned or Common Tasks: If you notice that your loved one begins having trouble completing tasks that were routine, this may be a sign of Alzheimer’s disease. These activities may include microwaving food, brushing their teeth, or recording a television show. Additionally, elderly individuals may easily forget tasks that they learned recently, even after being repeatedly taught.

2. Repetitive Behaviors: One of the most common signs of Alzheimer’s disease is when an elderly individual repeats the same task over and over, forgetting they have already done so. Alzheimer’s affects individuals’ short-term memory, causing them to forget tasks they have recently completed. This can include repetitively pacing or opening and closing doors.

3. Decrease in Motor Skills: Along with memory problems, individuals who are experiencing the early stages of Alzheimer’s can demonstrate problems with basic motor skills. One of the most telling signs of decreased motor skills is trouble writing, as Alzheimer’s can affect an individual’s ability to use their hands. Other signs can include difficulty buttoning shirts or tying shoes. Decreased motor skills can also impact an elderly individual’s ability to walk at a normal pace, often resulting in them taking shorter steps.

4. Confusion over Time and Place: As Alzheimer’s progresses, an individual with the disease may begin to forget simple things such as what time it is or where they are and how they got there. When elderly individuals become confused about where they are, they may begin to wander, which can be extremely dangerous in certain circumstances. Other signs can include a senior becoming disoriented or lost while walking, getting lost in the supermarket, or frequently losing their way while driving.

5. Increase in Daytime Napping and Insomnia: Along with affecting areas of the brain associated with memory, Alzheimer’s can affect a senior’s motivation and drive, leading to decreased activity during the daytime. In addition to less activity, an elderly individual may show a severe increase in their daytime napping habits. This can also lead to insomnia during the night, as their sleeping patterns change drastically. While it is normal for elderly individuals to have some sleeping changes, a severe change can be a sign of Alzheimer’s disease.

6. Poor Hygiene and Grooming: Whether it is due to memory loss or lack of motivation, seniors with Alzheimer’s may show a decrease in their concern for their personal hygiene. This can include a lack of grooming behaviors, such as showering or brushing their teeth, or may be shown in a lack of concern for the way they are dressed.

7. Difficulty with Problem Solving: Even seniors who were once excellent problem solvers can have difficulty working through numbers and other tasks when they start to become affected by Alzheimer’s. This can cause problems in daily activities such as paying bills or simply being able to follow a recipe. This can also cause problems in their ability to focus and concentrate on day-to-day tasks.

8. Speech Problems: Perhaps one of the most prominent symptoms of Alzheimer’s can be an elderly individual’s decreased ability to speak and join in conversations. They may find it challenging to come up with common words when speaking or may repeat themselves when speaking to others. Many individuals may resist conversation because of this difficulty.

9. Frequently Misplacing Items or Accusing Others of Stealing: A person with Alzheimer’s may begin to misplace items more frequently, as they are unable to retrace their steps and remember where they put their belongings. This can also lead to accusatory behavior, such as believing someone has stolen their items because they are unable to find them.

10. Overall Changes in Mood or Personality: While some mood swings are normal in every individual, people with Alzheimer’s may experience more extreme changes in their mood and personality on a day-to-day basis. These mood swings can include confusion, anxiety, fear, or becoming easily upset at work or at home. These personality changes can also cause a senior to shy away from social activities or conversations or avoid them both altogether.

Although many of these symptoms can be explained by the normal aging process, if they become too severe, they should not be ignored. If you notice that your elderly loved one is showing signs of Alzheimer’s disease, contacting their doctor can be an important step in diagnosing the condition. Your loved one’s mental and physical health is never something that should be taken lightly, especially when there is a chance of Alzheimer’s or another memory loss condition. Although there is no cure for Alzheimer’s, detecting the disease sooner can mean an increase in the chances of successful intervention for your elderly loved one. 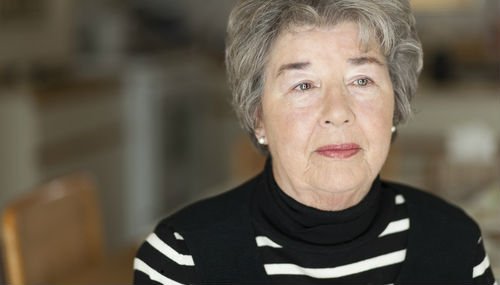 Signs it May be Time for Memory Care